Excavation aimed at locating walls possibly delineating an outer court of Theobalds Palace marked on a map of 1611, failed to find evidence of them but did locate a possible gully edged palace phase surface and arched brick drain heavily repaired in the early 19th century.

Extensive truncation, dumping and redeposition related to the 19th century repairs and possibly earlier Georgian activity, could have removed the walls and made interpretation difficult, but the surface may have been renewed in the second half of the seventeenth century, incorporated in the Georgian Theobalds Square and later been partly followed by a nineteenth century path or ride.

Fragment of the face from a stoneware "Bellarmine" jug 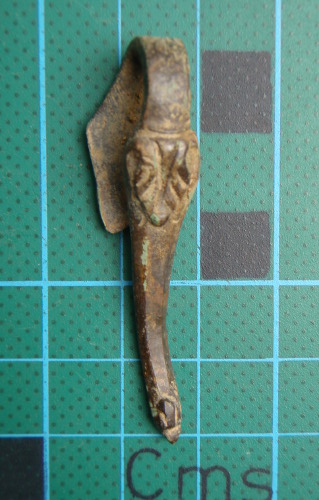 More details about this dig and other EAS excavation and research projects will be published in forthcoming issues of the society newsletter.